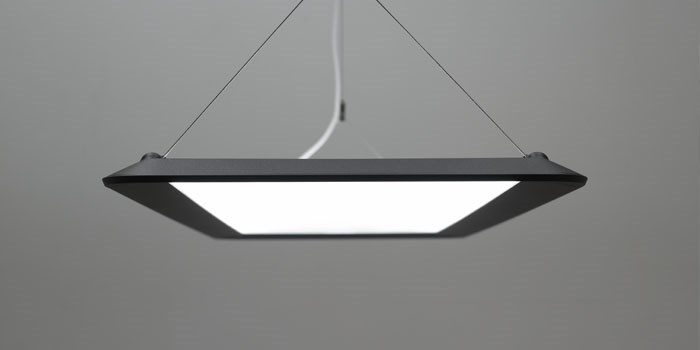 An acronym for light-emitting diode, an LED is a semiconductor that radiates light when subjected to electrical impulses – a phenomenon called electroluminescence. An LED runs on direct current (DC) and often requires a separate electrical ballast – a ‘driver’. The driver converts the mains voltage to an optimal level for the LED.

An LED consists of two sections: one with an excess of electrons (n-conducting) and one with a shortage of electrons (p-conducting). The light is generated when these electrons strive to achieve balance. The boundary between these two areas is called the p-n junction or depletion layer, and this is where it all happens. When direct current is connected to the diode, the excess and shortage balance out to create light.

LEDs are very small; the active light-emitting surface is no bigger than 1–2 mm². A single diode can rarely produce enough light for a given lighting situation. For the unit to work, it must be mounted on a circuit board, with multiple LEDs combing in a cluster to form a LED module (not to be confused with retrofitted light sources). LED modules come in many varieties with specially adapted light flow and design to suit specific types of luminaires.

Usually white light is created by applying a phosphor-based coating to a blue diode, either directly on the diode or on a separate plate over it. Colour shifting in red, green and blue is generally referred to as RGB control. About 65,000 colours can be obtained by mixing and combining these three colours at various strengths. Creating a specific colour requires some type of control unit or interface to a program that communicates via DALI or DMX 512.

The environmental alternative From an environmental stance the energy efficiency and long life span are the two key benefits of LED. At the end of its life an LED module is recycled in the same way as other electronics. Although unlike traditional light sources, such as fluorescent tubes, LED modules contain no mercury, which simplifies waste management and reduces the risk of emissions.