In the capacity of Bright Future Ambassadors, we’re visiting a team of solar entrepreneurs in the village of Muhunze, four hours’ drive from Lake Victoria in northern Tanzania. The public electricity grid doesn’t reach this point, although several villages along the way have been electrified under an ambitious government project to supply every household in Tanzania with electricity by 2025. In the team of entrepreneurs, which consists of six women and the husband of one of them, we meet Siku Mwinuka, who has been selling solar lamps for two years.

When we reach Muhunze after a bumpy drive, the sun is at its zenith. If it wasn’t for the warm welcome with singing and dancing that we receive on arrival, the car’s cool indoor climate would have seemed decidedly preferable. While everyone sings rhythmically in Swahili, it’s Siku who grabs our attention the most. She carries her sleeping two-year-old son tied on her back, his arms swaying rhythmically as she dances to the music. 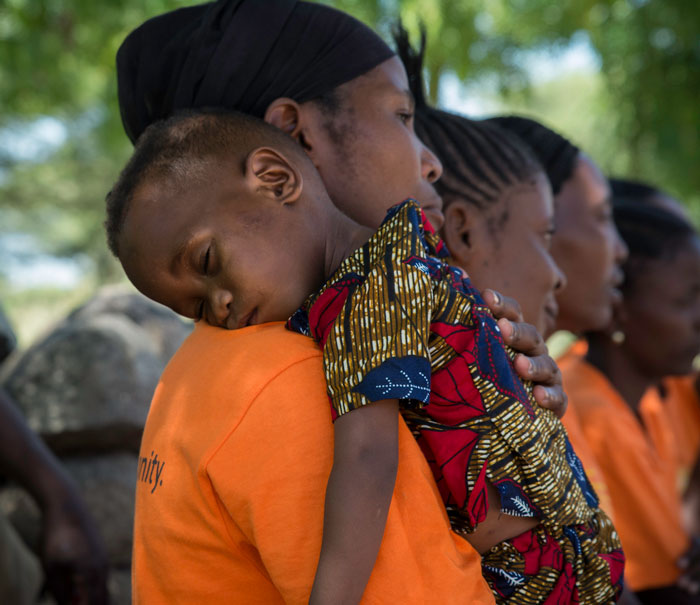 After greeting all the entrepreneurs, we ask why they decided to join Solar Sister.

"I saw an opportunity to earn an income while also getting to use the solar lamps myself", explains Siku, after sitting down with the other women under the shade of a giant tree.

Like many of the other women we’ve met on the trip, Siku was a housewife before she started selling solar lamps through Solar Sister. She explains that her income from selling the lamps has dramatically changed her life:

"I wasn’t involved in the household finances before, but now I have my own income to use as I please. I’m not dependent on my husband, and I’ve realised I can do business on my own. As a result I feel independent and have greater self-confidence. Now I feel I can do practically anything."

Like the household we’re visiting, most of Siku’s customers lack access to electricity and live in houses made of reddish brown clay with straw or tin roofs. The region we’re in is called Kishapu, and is a new addition to the areas that Fagerhult assists. Most of the local inhabitants earn their livelihood from growing potatoes, sweet potatoes, corn and sunflowers, and by keeping livestock. While travelling the region, we frequently have to stop our car to allow cows and goats to cross the potholed dirt roads.

“Have you seen any other positive effects of being a Solar Sister entrepreneur?” we enquire.
“Yes, many! We learn a lot about entrepreneurship. And with the profits from the solar lamps, I’ve been able to buy a pedal-operated sewing machine and have started sewing and selling clothes.”
“What type of clothes?” we ask curiously.
“Baby clothes,” answers Siku, and proudly points to her son who is wearing a two-piece outfit with an African pattern in blue and red. The clothes are sewn to order, and she says that her tailoring business, combined with the solar sales, has increased her income.

Like Siku, many of the other women report that their self-confidence has improved: in addition to gaining greater independence, they’re now successful entrepreneurs who are looked up to by others in their village. With their new know-how and the earnings from solar sales, several of the women have started other businesses including a restaurant, a mobile phone shop and a shop for agricultural tools. Some of them have even taken on employees.

Despite the torrid heat and conspicuous lack of shade and wind, Siku and the other entrepreneurs animatedly discuss what they’ve been using their new income for. Several of them proudly recount how they have moved from their parents’ homes into houses they built themselves, or how investing in livestock and agriculture has increased their supply of food. Some of the women are also investing in their children’s education:

“I’ve paid my children’s school fees, school uniforms and course literature out of the profits I’ve made from solar sales,” smiles Siku proudly. “My next goal is to upgrade my clay house to a brick house with a tin roof.”