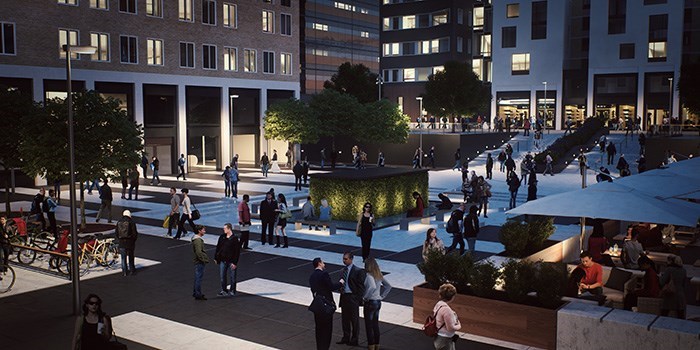 The square can be seen as a room in the city. In daytime the natural walls are the facades of houses that often surround the square. During the evenings, however, the walls become hard to distinguish. When the room is difficult to grasp the feeling of security is lost.

By illuminating the facades we get a better idea of ​​the size and shape of the room. Light on the fine details such as statues, benches, water and greenery can help support both the social interaction and the spatial perception.

To create dramatic effects on statues and facades, use spotlights, downlights and in-ground luminaires. What to use on which object depends on the desired effect.

A floodlight can be put on a post, which allows the light to be higher up on the object to be illuminated. Downward lighting is effective for facades and can be placed sheltered under a roof. In-ground lighting gives a very different effect by illuminating the object from below.

One rule is to choose a narrow beam fixture for narrow items and wide beam fixture for larger items. Remember to shed light from multiple directions to avoid the object being one-dimensional. Always consider the risk of glare.

Submerged lighting is the obvious choice when it comes to lighting of fountains and water mirrors. To enhance the effect of the water RGB and lighting controls can be used.

Being glared is uncomfortable and impairs our vision for a short while. It can also contribute to the feeling of insecurity. The lighting does not need to be so strong as to cause glare.

It is worth keeping in mind that older people are generally more sensitive to bright light. This is mainly a result of increased clouding of the lens (cataract) but also on reduced adaptation ability. Always place the fixtures so that the risk of glare is minimised.

Some fountains have water jets which can be illuminated. To achieve the best performance in this context, the luminaire can be placed just below the water surface (maximum four inches) and as close to the nozzle, or the place where the water jet landing in the water as possible. The light beam should be directed to follow the path of the water. The effect is that the beams glow in the dark.

Luminaires in exposed locations can mean big costs for maintenance and repair. The risk that the lights are vandalized is constantly imminent. Choose products with the highest IK-classification as possible.

. Perhaps vandalism can be curbed by the city’s beautification?