e-Sense Move High-bay is an innovative control system developed specifically for industrial environments. It is equipped with a dual microwave/ PIR sensor which can be easily configured or reconfigured via a remote control, helping future proof the installation should the layout or use of the space change.

Due to its varying occupancy level’s industrial applications can particularly benefit from presence detection to avoid unnecessarily lit spaces. One such example is warehouse aisles. With a number of presence sensors over the aisle the light can be turned on or dimmed up from a low level when a forklift enters. After a certain period of time the lighting is dimmed down or turned off. Normally you can keep times relatively short in such aisles.

Quick installation via a remote control

The number of ‘linked’ luminaires, the low and high light level, the delay times between full, low and off and the desired detection sensor are all configured via a remote control. After configuring the first luminaire, you can save the settings and then apply them on a luminaire by luminaire basis which significantly reduces commission time in areas where a large number of luminaires should all act in the same fashion.

e-Sense Move Highbay is a lighting control system where the sensors communicate via radio frequency. The sensors are integrated into a master luminaire which can then be connected to up to 20 slave luminaires. When presence is detected, information is sent to up to 15 master luminaires which then turn on, either at a full output or at defined levels specified during the commissioning process.

The system is equipped with a dual Microwave and PIR sensor which enables you to switch between presence detection techniques or utilise both simultaneously. e-Sense Move Highbays ability to alternate within the same fitting offers unparalleled flexibility should layout or use of the space change over time.

A Microwave sensor can detect movement through thin physical constructions, such as doors, and the sensitivity can be easily adjusted. However, in applications where luminaires are situated near non-static technology, such as air ventilation systems which can activate detection via their vibration, the PIR functionality is specifically relevant.

PIR sensor detects different depending on lens. The lenses are optimized for narrow aisles or open spaces with frequent movement. 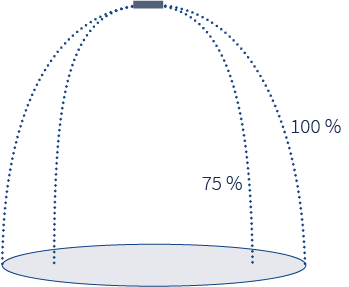 The microwave sensor acts different, the sensor detects lika a dome. It is possible to change the detection area by reducing the power output. It can be set to 100%, 75%, 50% and 10%.

Learn more about the system